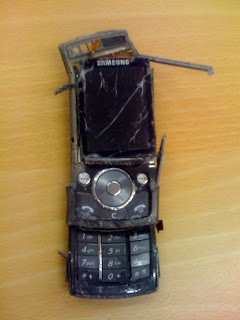 The bald-headed, naked truth is that I’m about to lose it.

I am really good----perhaps even extraordinary----at what one might term “the art of loss”. Coats, gloves, hats, golf clubs, car keys, eyeglasses, wallets, and a wide assortment of other items# have slipped through my watery grip and buttered fingers with more regularity than I care to admit. Bumbershoots are a particular specialty. I have misplaced and/or mislaid enough of these to keep a small town “bone” dry in the midst of a monsoon, especially if that small town were say, Atlanta or perhaps even Chicago. (That umbrella that you found in your office a couple of days ago, was more than likely left there by Cantrell.) At one time or another, I have forgotten the location of my car, once lost a sofa from the tailgate of a pick-up truck, and for eighteen hellish minutes lost my eight year old nephew at the mall!

The “it” referred to above as the object ‘most likely’ for loss is my new cell phone. Officially named the Techna Wizard 990, it replaces my decades old ‘Brick 100’. The later ‘died’ two weeks ago, after two decades of faithful service.

Towards the end, the Brick just failed to respond to anyone. It was also leaking what I am pretty sure was ‘transmission fluid’.

The Brick had been contemptuously nicknamed “Old Yeller” by my friends and family as it was also said that this is what I “morphed into” when taking incoming calls on the contraption. The replacement is an all seeing, all knowing, omnipotent, vibrating, ‘whirring’ dervish of transmitters, receivers, radar cameras, “interplanetary space eyes”, Zodiac calendars, Internet laser alarms, GPS crossword puzzle solutions and all manner of geosynchronous ‘do-hickeys’. Among the various and sundry features is what I am pretty sure is an atomic clock. (The cell phone company, it appears, envisions me as having occasional footraces with real, live atoms.) The Techa Wizard’s brochure even boasts of “…a sleek, sexy#, ‘art deco’, aerodynamic design”. The aerodynamics, I presume, make it useful for being thrown great distances after unsatisfactory encounters with cellular customer service. (“Course, foreseeing such an eventuality, one would think that the company would’ve designed the thing in the shape of a boomerang.) In the end, the Wizard’s features so baffle my mind and comprehension that I am almost tempted to violate the Sacred Testosterone Credo and actually crack the Wizard’s 1500 page Instruction Manual/DVD and Tutorial.#

The Brick had far fewer features than the new device, but our ‘relationship’ worked---me and the Brick’s. For one thing, it was impossible to lose---even for me. It had size and heft and weight (about three kilograms as I recall). It was a cell phone for a real man ---even if that man was say Jim Brown or maybe Sasquatch. The phone grew hot if more than two calls came in within a short period of time. (Instead of listening for one of those obnoxious ring-tones so prevalent on today’s state-of-the-art models, you could ---due t 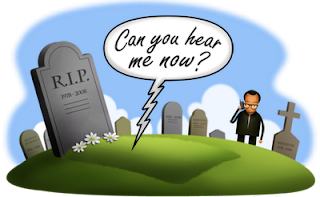 o its cracked façade and exposed “innards“---actually, at times, smell the acrid odor of an incoming call. About 90 seconds into any cellular conversation, Old Yeller would overheat---a great excuse for either ending the call or going to find an over mitt. Handling any call was more than a business transaction or family matter, it was re-conformation that the owner still had an above average threshold of pain and a re-affirmation of one’s very manhood. You certainly can’t get that kind of validation from ‘the Wizard’.

I’d managed to keep the Brick 100 in ‘good working order’ through the deft use of paper clips, in foil, rubber bands and an occasional drop of Feako’s Bar-Be-Que Sauce. The phone functioned quite well in close proximity to the carrier’s headquarters, although elsewhere, signal reception was dubious. A ‘deal breaker’ for most users, I found he lack of range and erratic reception to be beneficial when trying to avoid bill collectors, relatives seeking to borrow a few dollars, or insufferable telemarketers.

My new cellular carrier, Inter-Galactic Mobile, boasts that Tehna Wizard owners can talk with “…anyone, at anytime as long as the call is initiated within two million light-years of the Earth. Sadly, now anyone ---even “ET” ---can chat me up including relatives seeking “to borrow a few ‘de niro‘.” (I vaguely remember the Wizard salesman mentioning something about the phone being able to talk with dead people, but I remain steadfast in my refusal to try.)

Unlike “Old Yeller”, which minded its own business, the Wizard makes every effort to mind mine! The damn thing has a mind of its own and tries to bend me to its will. It constantly pushes, prods, scolds, rebuffs, and reminds me of “Things to Do”-----meetings, birthdays, reports and trash that needs to be taken out. The Wizard does not readily accept excuses for non-performance. (Perhaps it would be more aptly named, the ‘Conspiracy 2010’). The dam thing is sneaky too. Last week, it waited until I was asleep, went behind my back and without either permission or authorization, booked a two week cruise to Jamaica! (I hope that among its myriad of as yet untapped features is a part time job to pay for the trip.)

As you may surmise, me and the Wizard are still getting to know each other. Our relationship is, so far, an uneasy one. It is tenuous, at best. My talent at “the art of loss” may, for once, come in handy. And soon too.

Posted by Will Cantrell at 9:55 PM